If you’ve seen my Instagram lately, you probably noticed a picture of a brownie with green flecks inside. Maybe I’m too innocent for my own good, because it took me a while to process some of the comments I received, like “are you sure that’s kale??” 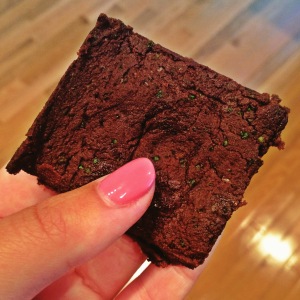 I promise they were NOT weed brownies. But next time I make a brownie with visible pieces of green leaves I may rethink posting it on social media! Oops.

Anyway, I know the whole kale trend can be overdone. It’s a little strange when a fad revolves around a vegetable. But when I saw a recipe on Chocolate Covered Katie (my absolute favorite healthy dessert blog) for kale brownies, how could I possibly resist? My favorite leafy green + my favorite substance ever (chocolate, duh) = a match made in heaven. Right?

Well, I have to admit the texture was…different. Definitely not your typical brownie. The best way I can describe it is spongey. In the comments section, Katie suggested that refrigerating the brownies overnight would help with the texture. It definitely helped a little, but not as much as I’d hoped.

However, the taste was great! You can’t taste the kale at all. It’s more like chocolatey goodness with a teensy bit of crunch. I brought them over to a friend’s house, and she agreed that although the texture took some getting used to, the brownies tasted realllly good. I found them to be even better when microwaved for a few seconds at a time.

The best part about this recipe is the nutrition facts. Only 109 calories and 6.1 carbs per brownie according to Katie’s post! That is a Type 1 diabetic’s dream, let me tell you.

Check out the recipe here:

P.S. – I attempted the “Healthy Chocolate Frosting” that is linked in the post. I’m not sure if I did something wrong, but I did not end up using the frosting because it just didn’t taste right to me. But the brownies were great on their own since they are so moist! One less step to worry about, anyway! Bloom where you are planted 🌸

This color story speaks to me 🍬

The view from my window makes me so happy 🥰

“Your life isn’t yours if you always care what

No, I’m not eating this ramen rn but yes, I wish